Start > Wystawy stale > Between the lounge and the bedroom. Boudoir of the lady of the house 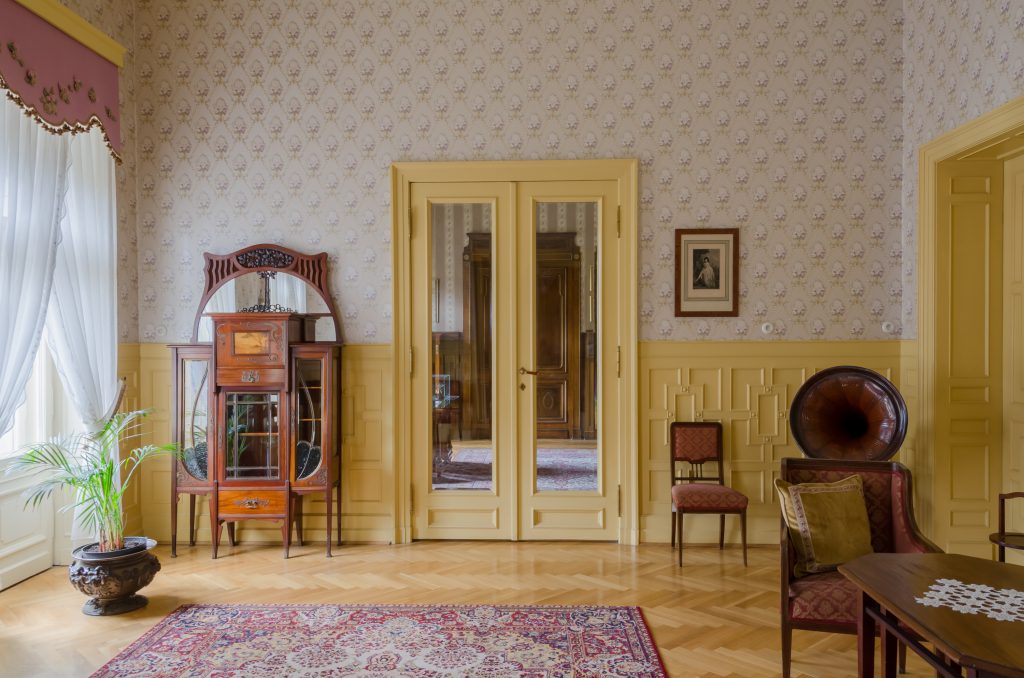 Between the lounge and the bedroom. Boudoir of the lady of the house

Boudoir as a room took its form in France in the first half of the 18th century. It was simultaneously popularised in Poland, initially in residences of royalty and nobility and then in manor houses of the landed gentry. In the 19th century, it was also popular in affluent town apartments, where it combined a private and a representative function. It was usually located between the lounge and the bedroom. The location stemmed from the fact that since the very beginning it acted as a private lounge and drawing room. Often the boudoir was used to entertain close guests, with whom the lady of the house was in more intimate relations. Among couples with longer marital history it was common for the husband to visit the wife in her boudoir. Here, the master of the house, after the toils of his working day, passed a while on short conversation and sipped a cup of tea. Since the very beginning the furnishings and decor of that interior were supposed to take account of the individual needs of the lady of the house. However, the choice of stylistics always corresponded with the current artistic tastes and the fashionable tendencies in visual arts. Nevertheless, it allowed for much greater – in comparison with the lounge – liberty.

Although at the turn of the 1870s and the 1880s the Neo-Rococo stylistics returned to the town dwellings of the bourgeoisie, often combined with oriental or orientalising elements, near the end of the century it decidedly started to give way to Art Nouveau forms or even to their simplified version that in furniture making alluded to classicist qualities.

In Łódź, such a kind of interior design was considered to be especially sophisticated and fashionable and, at the same time, it elevated the social prestige of its owner in the eyes of the public opinion. The elegant yet cosy character, which attested to her good taste and sense of style as well as of the newest fashion and art was complemented by the furnishings of the boudoir. The most important furniture included a set composed of a couch and two armchairs, sometimes complemented with an appropriate number of chairs or soft, upholstered stools. No less important part was played by tea and coffee tables, occasional tables, display cabinets and whatnots, on whose shelves china figurines, small vases, glass decorations, painted fans, miniatures and other decorative objects were placed, as well as books or magazines. Moreover, a boudoir could not lack cut flowers and pot plants, which were usually displayed in jardinieres. The whole design was complemented with paintings and engravings that most often engaged in female and genre topics.

In the interwar period, the boudoir initially takes on a slightly different character and thus becomes a kind of small antemeridian lounge. It is related to a change in the social role and position of women. With time, however, the boudoir disappears in the layout of even the most affluent dwellings. It assumes a reduced form of space (and no longer a separate room) – often within a small bedroom – conventionally demarcated by the arrangement of furniture.

Curator, author of the design, arrangement and programme of the exhibition: Łukasz Grzejszczak, PhD / Certified Curator