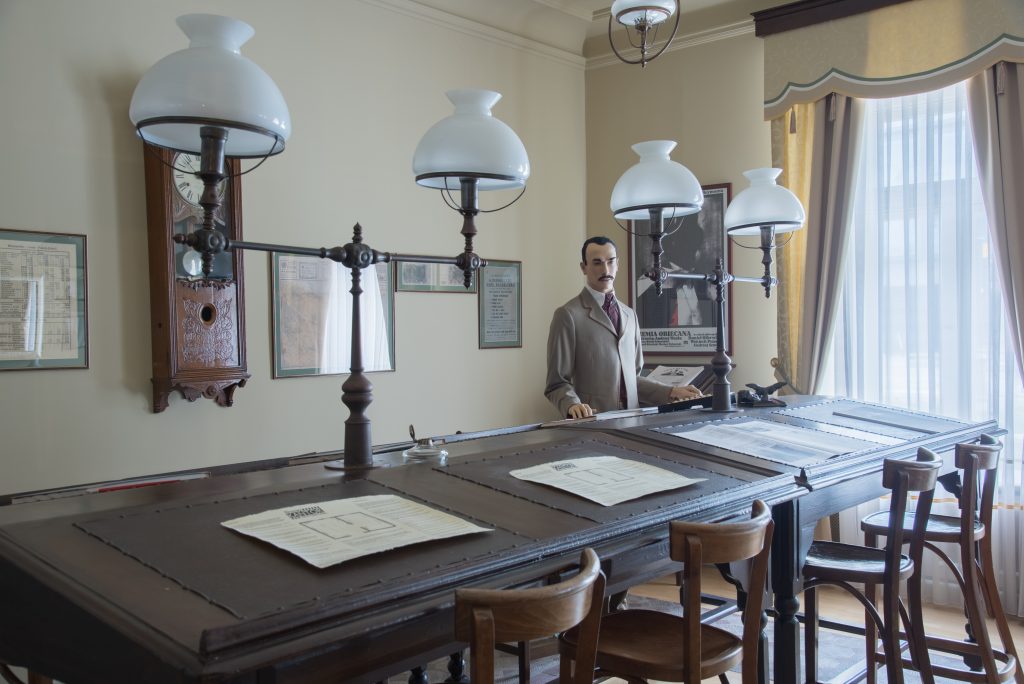 The Film Version of the Factory Office of the Promised Land

As we read in ”The Promised Land”, the Bucholz’ factory office was an extraordinary place: “The office was still as death; […] The electric light glided quiveringly over the black bookcases, which contained, ranged in due order, those huge ledgers bearing the years they referred to on their backs in white lettering.”

These words from the novel of Władysław Stanisław Reymont and the famous film by Andrzej Wajda were the source of inspiration for the multimedia exhibition in Łódź, the UNESCO City of Film. A new exhibition in the new revitalized rooms of the ground floor of the Palace of Izrael Poznański, the main headquarters of the Museum of the City of Łódź, shows what the Poznański family offices and work there looked like.

”The film version of the Promised Land” is a very special, film-like place in our Palace. The rooms resemble those of the past; they were used to receive guests, negotiate contract terms, make transactions,  bargain and settle employee payments. The factory office, the ”silent heart” of the factory was furnished in a simple and practical way. Today, it is an excellent place to hold lessons on the history of our city and to present the best known film and literature masterpieces on Łódź.

By arranging the adjacent spaces: the larger factory office and the smaller director’s office, the exhibition shows the original, authentic decor. The exhibition includes objects which ‘starred’ in the film version of the ”Promised Land”, including the meticulously refurbished writing desk, filing cabinets, office tables with inclined tops equipped with stylish “gas lighting”, “gas” ceiling lamps and chairs. Original Łódź furniture from our Museum has been added to the exhibition.

The ”film” style of the interior decor of the factory office and the manufacturer’s room are emphasized by scenes from the film ”The Promised Land”, film stills, the actors’ costumes, as well as the cult poster by Waldemar Świerzy.

Visitors to the Museum will be able to see through the lens of film and literature, the world of history and tradition of Łódź which inspired the greatest of filmmakers of Polish cinematography through its preserved heritage.

The exhibition reminds us of the characteristic and often forgotten professions of the past and the words and expressions used by factory office employees of the nineteenth century industrial Łódź.

The exhibition has been prepared for a wide audience, including people with special educational needs. Therefore, all recordings have audio descriptions (for visually impaired people), as well as, certified PJM recordings (for hearing impaired persons). In addition, specialized didactic materials (audio descriptions of the interior, tactile charts, a system of pictograms and alternative texts) have been prepared for  people with mental impairment to enable them to explore the exhibition on their own.