Start > Wystawy stale > Mock Up of the Lost Quarter 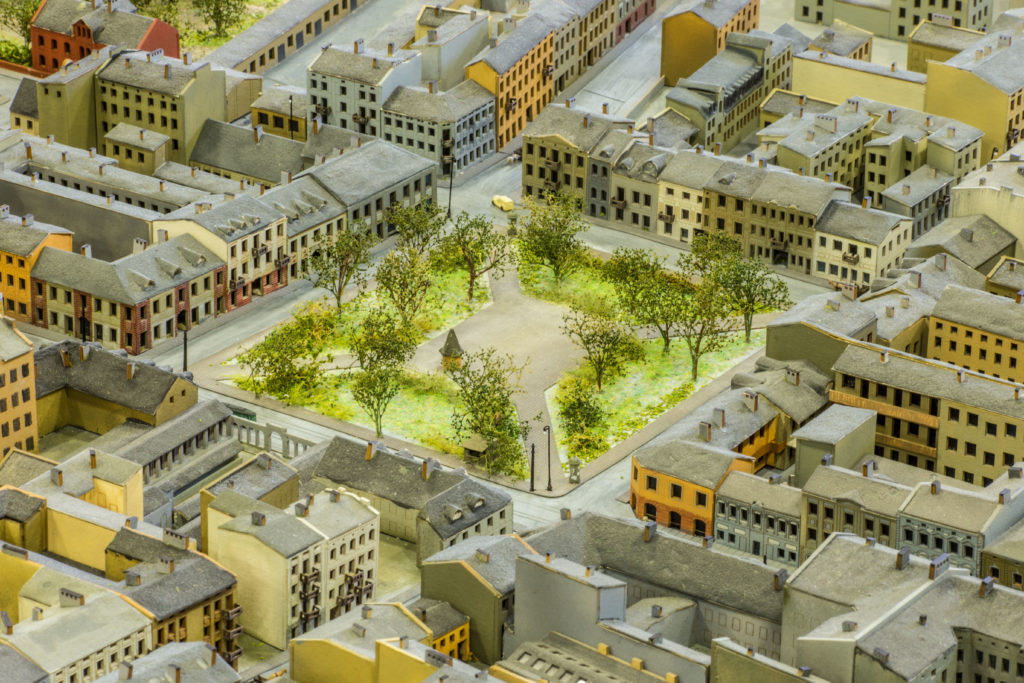 Mock Up of the Lost Quarter

In the main hall of the Museum, we can see the first in the history of our city scale model of historic fragments of Łódź of 1939, i.e. the time when the development of Łódź was the most dense, right before the destruction of World War II.

The first part of the scale model, which was presented in September 2015, covers the development that before World War II was situated in the territory of the current Park Staromiejski (Old Town Park) and the Old Town, between Ogrodowa, Północna, Wojska Polskiego and Limanowskiego Streets. A vast majority of those buildings no longer exist. Some of them were demolished during the construction of the Łódź Ghetto in order to separate it from the rest of the city with a strip of empty land. The tenement houses that were located directly within the territory of the Ghetto were razed to the ground after World War II, so that a modern workers’ settlement could be built in their place. The most characteristic objects in this part of the scale model are: the red, two-tower church under the invocation of the Assumption of the Holiest Virgin Mary that towers over this part of the city, the nearby Alte Szil synagogue and the space of the Old Market.

The second part of the scale model, which was presented in July 2016, presents the New Town from the pre-war period: quarters between Pólnocna, Południowa, Zachodnia and Kilińskiego Streets. Most of the historic street names have survived up to this day and only Południowa Street can remain a mystery for some citizens of Łódź, since it changed into two streets: Próchnika and Rewolucji 1905 r. The majority of the tenement houses visible in this scale model can be still seen in the landscape of Łódź. There are, however, whole fragments of development that were recreated on the basis of archival photos. The most characteristic objects in this part of the model are: the factory in Kilińskiego Street with its imposing chimney (premises that belonged to Robert Biederman), the edifice of the City Credit Society with its characteristic drives and the building of the Trade Bank opposite, which today performs the function of the seat of the Jewish Community. It is also worth paying attention to the eastern frontage of Zachodnia Street, which was demolished in the 1960s, towards widening the said street.

After the analysis of hundreds of photos and archival folders, the citizens of Łódź were given models that, we hope, will at least partly restore the memory of now non-existent fragments of Łódź. We wish the scale model to be perceived as a source of knowledge about the past of our city and to become the basis for further educational activities in the future.

The scale model, made within the framework of the ‘In search of the lost quarter’ project, entered the permanent exhibition of the Museum of the City of Łódź and can be seen free of charge within the opening hours of the Museum. Together with the scale model we make available a film that discusses the past of the presented fragment of the city and an online publication entitled ‘In search of the lost continuity of the city’.

The project was carried out thanks to financial support of the Ministry of Culture and National Heritage and the Orange Foundation as well as thanks to Mr. Marek Zimoch.