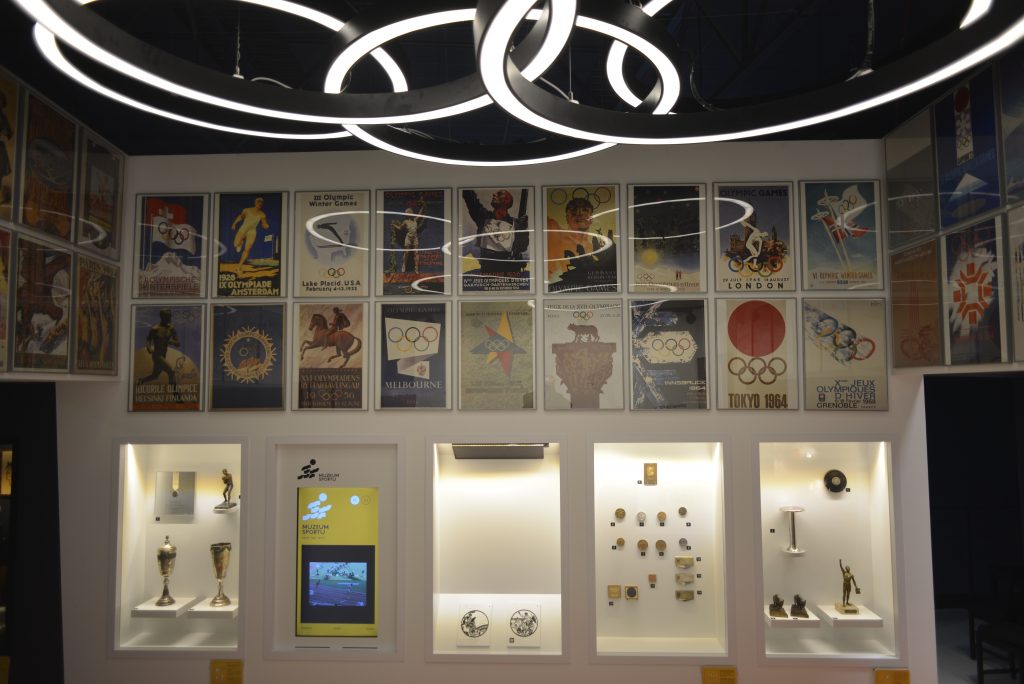 An interactive permanent exhibition prepared by the Museum of Sports and Tourism, presented in the Lodz University of Technology Sports and Education Centre “Sports Bay” at 10 Politechniki Ave., introduces visitors into the history of sports and tourism in Łódź, signals the most important events and figures, but it also promotes physical activity and fair-play rules.

Its chronologically ordered narration brings us closer to the birth of the sport of Łódź in the 19th century, its development in the interwar period and its successes after the World War II. Special attention was paid to the multinational and multi-ethnic character of the sports of Łódź since 1939 and the participation of the citizens of Łódź in the Olympic Games. The narration about the sports of Łódź shows this form of activity as an important part of social life, very often with a meaning that goes beyond sports arenas.

The expositions reminds us the figures of distinguished sportspeople of Łódź that focalise the history of sports in Łódź:

– Akiba Rubinstein, an outstanding chess player, directly before the outbreak of the World War I considered the best chess player in the world. From 1903 affiliated with the Łódź Association of Supporters of Chess Playing. Representative of Poland in chess Olympiads in the interwar period, in 1930 he led Poland to a team victory during the 3rd Chess Olympiad in Hamburg.

– Roman Kantor, the most outstanding fencer of Łódź in the interwar period, Olympian from Berlin in 1936, son of a famous jeweller from Łódź, he took an interest in fencing during his studies in Paris. Having come back to Łódź, he became a player for the Military Sports Club
and then for the Łódź Sports Club. He was murdered by Hitlerites in Majdanek on the account of his Jewish ancestry, probably in 1943.

–Maria Kwaśniewska-Maleszewska, the most outstanding athlete from Łódź in the interwar period, bronze medal winner from the Olympics in Berlin in 1936 in javelin throw. During the war connected with the resistance. After 1945 an activist of both Polish and international Olympic movement.

– Władysław Król, a ‘legendary’ figure from the Łódź Sports Club. Outstanding footballer, hockey and tennis player as well as a trainer of the ŁSC. Olympian from Garmisch-Partenkirchen in ice hockey in 1936. He was also a representative of Poland in football, trainer of the Polish ice hockey squad and of the ŁSC football team, with which he won the championship of Poland in 1958.

– Jan Tomaszewski, outstanding goalkeeper of the ŁSC and later of Belgian and Spanish clubs. Bronze medal winner of the football world championship in 1974, Olympic vice-champion from Montreal in 1976.

– Zbigniew Boniek, the most outstanding Polish footballer of the 1980s. Player of Widzew Łódź and later of Juventus F.C. and AS Roma. Bronze medal winner of the world championship in 1982. Since 2012, the president of the Polish Football Association.

Important elements of the exhibition entitled ‘Museum of Sports. Faster, higher, stronger’ include screening and interactive equipment that enables the visitors to familiarise themselves with recordings of important sporting events and the specificity of individual disciplines, and that gives them a chance for a sports training.

In the exhibition space, divided in four, a chess café was arranged that refers to the interior of Roszkowski’s café from late 19th century (later known as ‘Łodzianka’, at the intersection of Piotrkowska Street and what is now Moniuszki Street), which was the meeting place of, among other people, chess players from Łódź, who organised games and tournaments in it. On a special table, a chess computer was placed that enables visitors to play against a programme that simulates games against distinguished chess players.

The second separated space was dedicated to the participation of sportspeople from the City and the region of Łódź in the Olympic games. Here we present Olympic medals, participation certificates and Olympic identity badges.

In the third part of the exhibition, there is a separated sports stadium with stands, which reminds us of football and athletic events.

The last part of the exhibition, dedicated to tourist traffic, tells us about the biggest achievements of cycling in Łódź and climbing expeditions. Here we will be able to try our hand at a training on professional road bikes that were placed on training simulators. In the
tourism section of the exhibition we also installed a special application that creates visualisations of visitors’ faces, simultaneously superimposing elements of clothing of Himalayan climbers on their figures, and achieves the effect of change at chosen temperatures below zero.

Within the framework of the permanent exhibition in the ‘Sports Bay’ we are also implementing an educational programme in the form of museum lessons, educational meetings addressed to a wide circle of listeners, and educational contests.