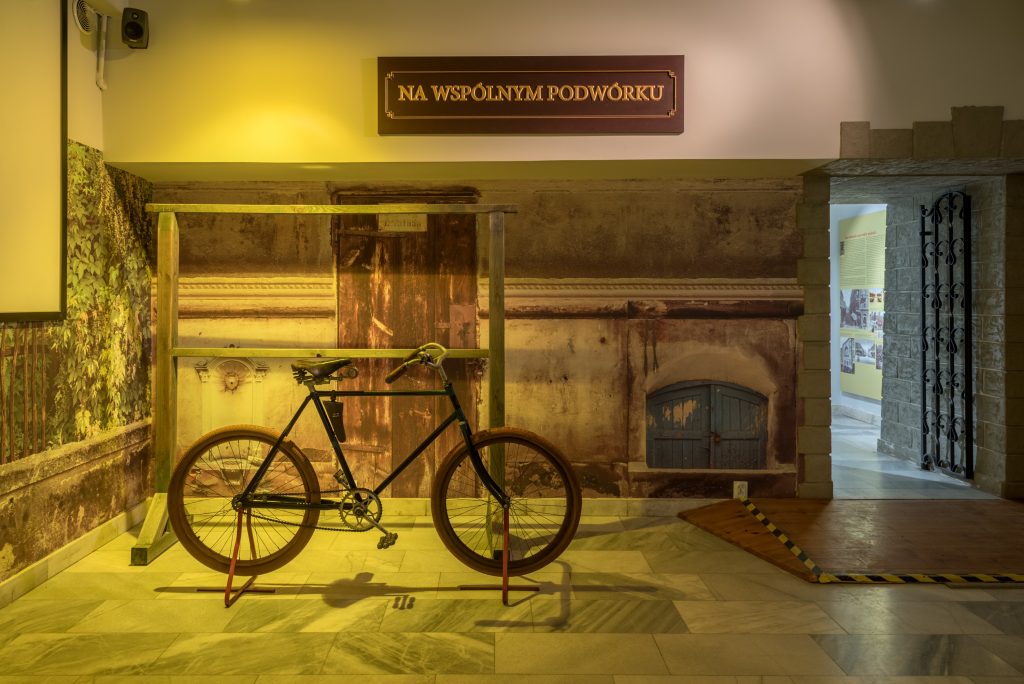 In the common backyard

On a common yard – new permanent exhibition about multicultural Łódź

The conceptual assumptions of the permanent exhibition entitled ‘On a common yard – Łódź as a melting pot of cultures and denominations’ were developed in 2012. That year we also instigated endeavours aimed at obtaining financial means, which ended in success in 2015, when the application prepared by the curator of the exhibition for subsidising the project within the framework of the ministerial programme ‘Development of cultural infrastructure. Priority: Cultural infrastructure’ obtained the first grant from the Ministry of Culture and National Heritage, intended for the purchase of multimedia equipment for the exhibition. We obtained another grant, pursuant to the procedure of a two-year funding, this time from the programme: ‘Cultural Heritage. Priority: Supporting museum activities for years 2016-2017’. Also the City of Łódź allocated its own funds, which, together with the other means, made the implementation of the project possible.

On the exhibition prepared in the nether regions of Izrael Poznański’s Palace, we present the basic knowledge about the past of our City, about Łódź before 1939. We endeavoured to make the manifestations of multiculturalism evident through the collected exhibits, archival photographs, arrangement and scenography solutions as well as the audio-visual contents.

On the exhibition, multimedia are a supplement to the interwar narration. We limited flashing screens to the minimum necessary and there are no backlit boards. That is why the colourful stained glass-work, as if backlit by sunrays, looks so beautiful in the space of the corridor that was common to all the household dwellers.

One of the assumptions of the exhibition is to familiarise the viewer with a world that no longer exists and that used to be so much present. With that exhibition we tried to ‘virtually’ restore the bustling world of the multinational and multicultural Łódź, with its positive and negative sides, as well as to make the visitors aware what the rupture caused by the war and its consequences meant for this European city.

The exhibition is presented in eight thematic zones, each of which is dedicated to chosen issues connected with the life of the industrial, multicultural Łódź, presented against the background of its industrial and demographic development. The narration will lead the viewer
along several axes that converge in a specially arranged space of a city yard, where the multicultural coexistence and neighbourhood of Poles, Jews and Germans is focused as if in a lens. The conception of the exhibition assumes that the multinational and multicultural community of the industrial city, the people of the promised land, will be represented by a group of characters that live in a common house.

The meeting between our viewers and the ‘Lodzermenschen’, tenants of one of the tenement houses of Łódź, will be preceded by touring paths, within which the viewer will get to know better the city and its history from the era of industrialism. Thanks to the audio content the viewer will listen intently to the sounds of the city and will feel the atmosphere of street commotion. They will visit the office of a czarist clerk, get to know the temples and synagogues of Łódź, meet a factory owner on their way, take a peek into an engraver’s workshop and a milliner’s shop in order to finally enter, through the clearance of the entrance gate, a typical city yard, from which they will be able to make for flats of multi-ethnic families.

In the arranged flats of the Jewish Goldman family, the Polish Kaczmarek family and the German Langer family, a crucial part is played by specially selected objects connected with the religion and language of their dwellers. The cultural traditions of Łódź, Jewish, Polish and German, were presented contrapuntally on the exhibition and illustrated with a certain simplification, referring the viewer to artefacts and symbols, which will help them get to know and understand the everyday life and customs of others.

The narration of the exhibition leads the viewer through different areas of historical and ethnological knowledge in order to let them give vent to emotions and experiences that accompany childhood memories in the zone of the pre-war tenement houses and the yard that was common for all its inhabitants.

Common house, common stairs, corridor, yard, well and gate. The visitors experience the neighbourly everyday reality together with the multi-ethnic inhabitants of the common house. They do so from the perspective of a person who, walking along the common corridor, peeks through the open doors to traditionally furnished flats and listens to the conversations held in Yiddish, Polish and German. The polyphony of the neighbourly world collides contrapuntally here, but with a mutual respect towards cultural and denominational disparities.

The neighbourly life of a multinational community is a topic that simply makes you pause for thought. In the tenement, everybody knows everybody, people know a lot about one another, one group spy and eavesdrop on the other. Gossip goes around the tenement, loud conversations and screams can be heard, as well as the sounds of revelries in the flats. Under one roof, yet separately…

And although separately, yet Aurelia Scheffel tells beautiful stories about manifestations of feeling of neighbourly community, when she remembers whole families going out of town together, to one of the forests just outside Łódź, about neighbours efficiently organising feather plucking, about neighbourly help in difficult times of illness, childbirth or mourning. A cast-iron well pump, around which the neighbourly life of the inhabitants of the tenement was centred, and a characteristic shed / woodshed with a dovecote on the roof are two important elements of both her memories and the museum arrangement.

The atmosphere of the pre-war yard is also built by audio content with the sound of laughing and running children, small talks of female neighbours by the well, sounds of working well pump, water poured into buckets, sounds of beaten carpets, coal unloaded into the basement, birds singing, pigeons cooing or dogs barking. The recollective narration of this German from Łódź is the essence of one of the audio-visual contents displayed on the exhibition.

Another, equally interesting proposition is the historic mangle. In the exhibition narration, it is run by a resourceful German that lives next door, Frau Langer. The viewer’s experience will be intensified by, apart from the fact of setting in motion the historic machinery, the sound effects connected with the acoustic properties of the characteristic work of the flywheel and shafts of the mangle. There will be plenty of gossip and sensational ‘news from the city’ as well as cognitive educational content presented on exhibition boards.

Life of a multicultural city is also entertainment. For a moment of relaxation, the viewer will go the café (formerly known in Łódź as cake shop) arranged in zone VIII. One of our proposals is the possibility to rest (very often people forget about it on exhibitions) with the accompaniment of popular songs of the 1920s and 1930s. Another form of spending free time in this zone is a bit more activating. We mean an interactive, multi-touch application with an educational quiz, prepared as a multi-touch monitor integrated into the scenography.

Our attractive collection of porcelain and functional glass is exhibited in the next backlit showcase. A front shop window with a display of porcelain utensils, appurtenant to the stall of the Jewish merchant Goldman, was arranged in the facade wall of the common tenement.

A portion of cheerful childhood memories will be provided by the interactive games stand, where visitors will be able to play hopscotch and ball, designated from the common yard, addressed especially to children, teenagers and family groups, but also senior-friendly.

Translations into English of all the texts placed on the boards and presented in audio contents guarantee linguistic availability to foreigners. Sounded films with Polish voice-over have English subtitles placed at the bottom of the image, on the so-called crosstalk.

Objects that come from demolition of local tenements: elements of a tile stove with rocaille decorations, which were mounted in the Jewish room, a set of terracotta tiles in the czarist clerk’s office and three entrance doors with a decorative grillwork*, fixed on the facade of the arranged tenement house, as well as the objects acquired for the exhibition from the city space: cast-iron well pump and historic manhole cover with an inscription written in Cyrillic script that came from the local company of brothers Zell** are all important elements of the scenographic arrangement. Historic entrance door from a 19th-century house of a handicraftsman (ca. 1840), two-layer, boarded in diamond shapes and studded with smith’s brads***. The above-mentioned artefacts, ‘witnesses of history’, which were given a new life after the renovation works, co-create the narration of the exhibition.

The project is a big, multifaceted enterprise with a key importance for the Museum, the city and the region. We hope that the effects stemming from the implementation of the exhibition entitled ‘On a common yard – Łódź as a melting pot of cultures and denominations’ will allow the Museum of the City of Łódź to carry out its mission and the exhibition will be a place to shape historical awareness of both the citizens of Łódź and guests from outside. It will become the forum for exchange of intergenerational cultural competences, where novelty and innovation of modern multimedia techniques will meet history and interwar narration.

Drawing from the richness of cultural heritage and arousing emotions and experiences triggered by the memory of events, people, places and things will translate themselves into positive connotations, which will help to determine one’s belonging to a place, district and city, and, based on the narrations evoked on the exhibition – the identity of Łódź and one’s own.

The exhibition has been open since 11 October 2017.

Author and curator of the exhibition: Anna Walaszczyk – ethnographer, senior custodian, manager of the Department of Cultures and Denominational Traditions of the Museum of the City of Łódź. Author and curator of the permanent exhibition entitled ‘On a common yard – Łódź as a melting pot of cultures and denominations’. Connected with museology since 1980: she used to work in an open-air museum in Radom, Museum of Archaeology and Ethnography in Łódź and Museum of the Town of Zgierz, where she performed the function of director for six years. In the museum in Zgierz, she carried out a proprietary permanent exhibition entitled ‘Kruszówka – bourgeois interiors from the turn of the 19th and 20th centuries’. Since 2005 she has been working in the Museum of the City of Łódź. Author of many exhibitions, a cycle of museum meetings entitled ‘I like to know’ as well as educational programmes and cultural events. In 2016, she was decorated by the Minister of Culture and National Heritage with the Decoration of Honour ‘Meritorious for Polish Culture’.

*The artefacts donated to the Museum by the City Heritage Conservationist in Łódź were subject to renovation by a local company from Łódź, Renowa – Renowacja i Pielęgnacja Obiektów Dziedzictwa Historycznego Karol Brzeziński.

**Exhibits come from the collection of the Water and Sewerage Service in Łódź and was lent for the exhibition as a long-term deposit.

The project was co-financed from the funds of the Minister of Culture and National Heritage and the City of Łódź.